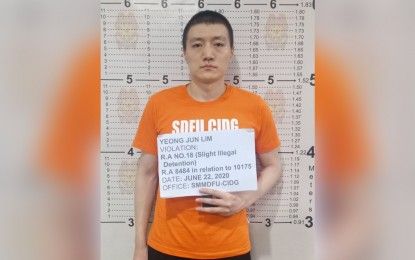 
MANILA – Authorities are now hunting down one of the two South Korean nationals who escaped from the detention facility of the Criminal Investigation and Detection Group (CIDG) in Taguig City over the weekend, the National Capital Region Police Office (NCRPO) said on Monday.

During the incident, Lim asked the jail guard to unlock the cell so he can relieve himself in the comfort room. After the guard opened the cell, Lim and Kwon mauled the guard, took his service firearm, and jumped out of the window on the second floor of the CIDG facility.

Kwon was re-arrested in a pursuit operation while hiding at a construction site along Lawton Avenue in Barangay Fort Bonifacio in Taguig City at around 11 a.m. Sunday while Lim remains at large.

Kwon and Lim were arrested by the CIDG on June 22 in Parañaque City for voice phishing or phone fraud. The operation also resulted in the rescue of another Korean, Gun Se Lee, whom the suspects detained for allegedly feeding information to authorities.

The two were later detained at the CIDG at the SPD compound, facing charges for violation of Republic Act 10175 or the Anti-Cybercrime Law and illegal detention.

The two are also wanted in South Korea and facing a 10-year jail time for telephone fraud and are listed in the Red Notice of the International Criminal Police Organization (INTERPOL).

Sinas also ordered the NCRPO Internal Affairs Service to determine the administrative liability of the guard on duty.

"Intensified manhunt operation against the remaining escapee continues. Series of information gathering, surveillance, and monitoring of his possible whereabouts are now being undertaken to ensure his re-arrest the soonest possible time,” said Sinas.

CIDG director, Maj. Gen. Joel Coronel, has ordered the relief of the duty jailer and placed him under restricted custody pending an investigation. (PNA)
Link : https://www.pna.gov.ph/articles/1118245